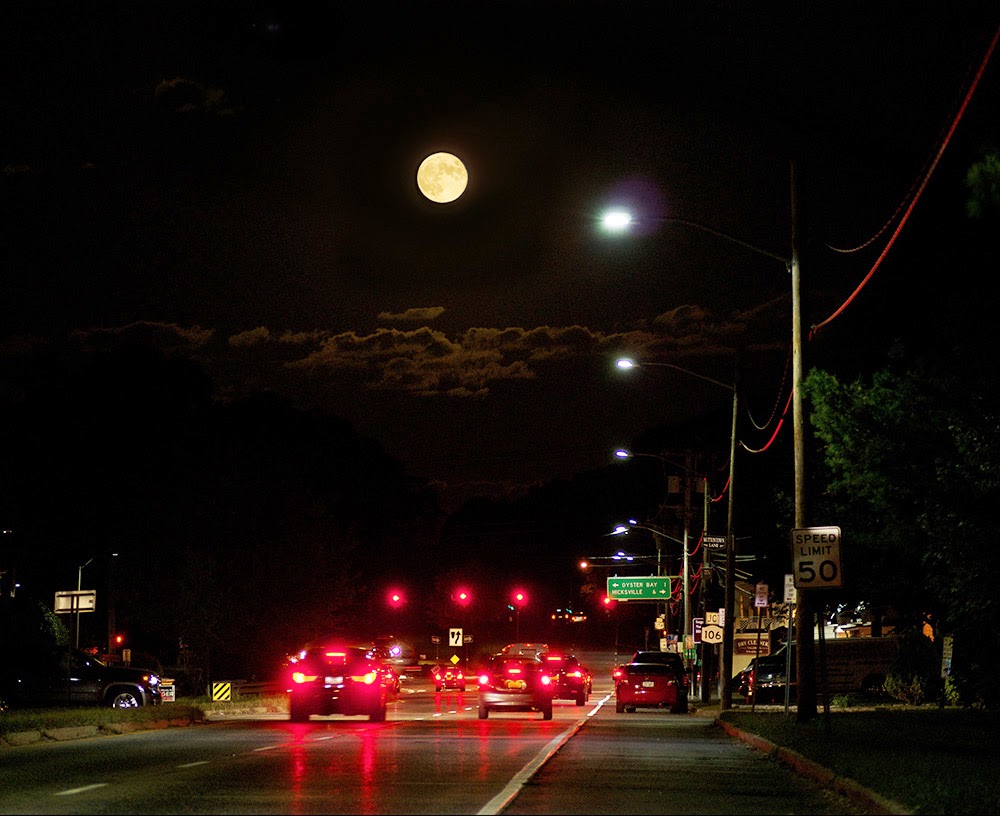 I was driving east along Northern Boulevard, on the way to my astronomy club meeting, and saw this magnificent astronomical scene - moonrise.  It was particularly stunning because the moon was rising directly over the highway.  It took maybe four seconds to pull the car over and stop.  I needed a tripod because the exposure was too long for being hand-held.  Want to know the secret to this photograph?  OK.  So in the main exposure of the scene, the moon is so bright that the moon was just a bright white circle.  So I switched to manual exposure, and underexposed the scene in another photo, which then showed detail in the surface of the moon.  Then I used Photoshop to carefully combine both images.  When I worked for the newspaper, this kind of work was forbidden.  But I don't work for the newspaper any more.  I can do whatever I want!

Wow, Ken, incredible shot. Perfectly framed with the street lights and the car lights. The moon cooperated by rising in the proper spot! I thought after you mentioned needing a tripod you might have a story about using the old beanbag on the hood/roof of car. --Stan

Makes me smile that you can do whatever you want! You put a lot of work into creating this cool photo.
Joan

Thank you both for your comments! I don't carry a beanbag, but I do always carry a tripod. Was a lifesaver for this shot, with having to superimpose two images.

you should teach this stuff!!!

What fascinates me about this photo is that because of the brilliance of the moon, you can see the clouds so clearly - and they're white. White clouds at night are like magic because they're usually so dark and invisible. I always thought they went away, but no - they stay suspended above us, waiting for the sunrise so they can blossom again. It makes me think about what else I may be missing when the lights are dimmed.