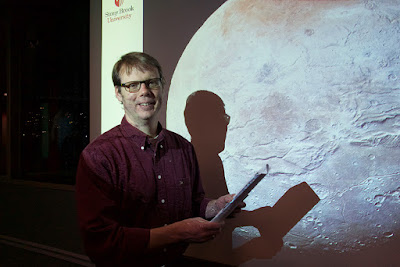 We had a wonderful speaker at the astronomy club meeting tonight.  His name is Dr Calder and he spoke about some of the things we have learned about Pluto from the New Horizon's spacecraft.  The planetary probe was launched on January 2006 and passed by Pluto 9 years later on July 2015.  It was a terrific talk and that is a photograph of Pluto's moon Charon.  I decided to try to do a portrait of Dr. Calder, illuminated by the digital projector.  Only thing is, that some of the surface detail of Charon fell on his face, and it ended up looking as if he had a skin disease!  Epic Fail!  I should know better by now.  This is the second time I tried this technique, and the first time it was even worse than this!  Man, when will I learn?

So, is Pluto still a planet?

I did not notice this. Spencer's are so critical of themselves. Relax and enjoy or go back to college! LOL
Joan

Dude: Yes, Pluto is still no longer a planet. It is a long story, and I would have liked to see it still listed as a planet, but that is not to be. It is missing a few characteristics that all the other planets have, so I am living with it as a "minor planet."

OK, so scratch a Pluto visit off my bucket list.