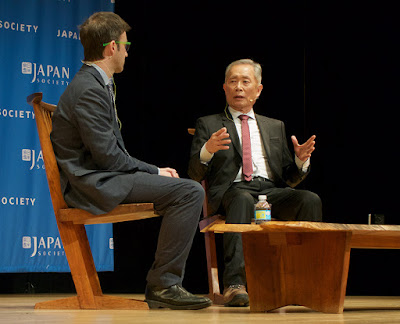 I went to the city tonight to attend a lecture at the Japan Society by George Takei.  My friend Stan and his wife had two tickets, but Ann couldn't make it, so Stan invited me.  George is presently on Broadway in a musical called "Allegiance" which is based on his own story of he and his family being sent to a U.S. Japanese-American internment camp, when he was five years old.  They were in the camp for three and one-half years!  His story was very moving because of all the details he shared with the audience.  The first thing he experienced was when two soldiers with rifles banged on the door of their house and escorted the whole family away before dawn.  As an activist, his mission is to promote seeing that this story is told in history classes everywhere.  Education is the only thing that will keep this from happening again.

Nice of Stan to invite you to join him. I would have been holding my breath. His lecture must have been so powerful and moving. Sad to think of him and his family being in camp for over three years.
Joan

Nice post. Great that you could come. I think you had the slightly better angle. I posted on on facebook.-- Stan

Hi Ken-
While it is reassuring to THINK that education would prevent it from happening again, given some of the rousing support to the hate speech from Trump about everyone from Mexicans to Muslims, it isn't much of a stretch to see it occur again.

Did anyone but me notice the chair - interesting design!
-Dean

Weren't you lucky to be able to attend! Must have been difficult listening to the hardships that he and his family suffered for over 3 years.
I did notice the cool looking chair but actually thought that it looks uncomfortable to sit on!! bsk

The chairs were the first thing I noticed when we entered the auditorium! They were very striking silhouetted against the black background.