You are going to love this story! 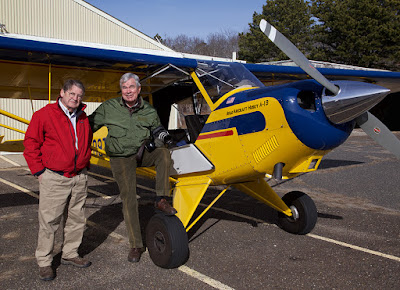 On January 9th I posted the story of my going to the FAA Seminar on Aerial Photography given by Russell Munson, and I described his aerial photography.  So here's what happened, unknown to me.  An editor friend of mine at Newsday happened to see my blog, and called Russell and asked if she could do a story about him!  Then she assigned a writer to the story.  The writer who I know, called me to say he was going to do the story, and he wanted me to tell him a bit about Russell.  So we chatted and I talked about flying and photography, and how good his photographs were.  But I was feeling so jealous that the story was being done and I wasn't going to be a part of it.  I was bummed!  Then I got an idea...   I called the director of photography who is a friend of mine, and asked if he would consider assigning me to the story.  He said "Sure" and I was ecstatic!  So this morning I got up early, picked up the reporter and drove to East Hampton, and we spent the day hanging out and interviewing and photographing Russell and his plane.  So I had to have a photograph of the two of us together with his airplane!  What a day!

Nice that you could do this considering it was your blog that started the wheels in motion. Cool photo. What is the plane?
Joan

Oh Ken, this photo brought tears of joy to my eyes! I have known Russell and his wife Linda for over 20 years as they had a house in Sun Valley. He is one of my favorite people in the world as are you! This photo touched my heart deeply. We certainly are all connected! Love to you and your family! Alex

I do love this story. So happy for you that it wall worked out perfectly!! bsk