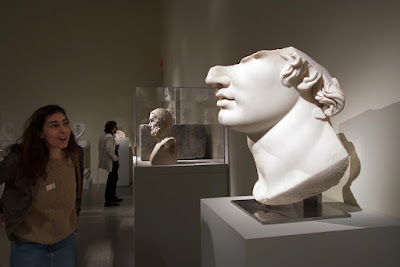 This a sculpture in an amazing exhibit at the Met called "Pergamon" - an exhibition about the wealth, artistry, and technical achievements of the Hellenistic period—the three centuries between Alexander's death, in 323 B.C., and the establishment of the Roman Empire, in the first century B.C. The sculpture is titled "Fragmentary colossal marble head of a youth."  It is from Greece, 2nd century B.C.  Anyhow, I was looking at this enormous head, and near me was a distinguished looking older gentleman and his wife.  He was explaining that a curator had explained to him that this statue was not intentionally damaged - apparently there was an unseen fault in the marble, and after the sculpture was finished, it just broke!  Can you imagine the sculptor's reaction!  Oh man!  So it is always good to eavesdrop at these exhibitions.  I like the first photograph a lot.  I got in position to photograph the head, and just then this woman stepped into the frame, and I clicked the shutter when I saw her reaction!  This is an absolutely stunning object to be in the presence of, by the way. 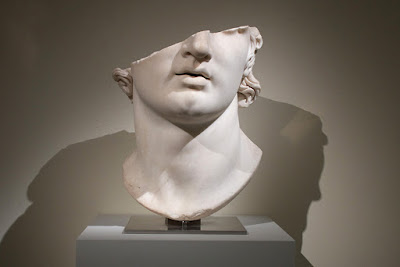