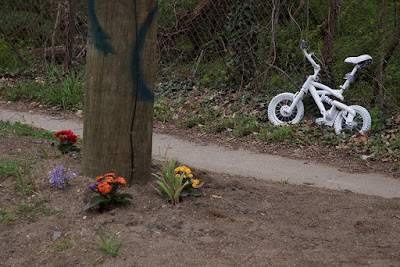 We were upstate for a week, and when we got back we saw this on Shore Road.  The bicycle painted white is usually called a "Ghost Bike," and traditionally is displayed at a location where a cyclist has died in an accident.  I was worried and did some searching for a couple of weeks before I heard the story.  A troubled young man, who was accused of murdering his roommate with a hammer, was awaiting trial.  He apparently was driving late at night with a female passenger, and he was driving crazy fast.  His car smashed into this giant high voltage power pole, and cut it completely off at the base!  He died instantly, and amazingly, his female passenger had non-life threatening injuries.  Wow!  So this crash was not about cycling at all.

The real question here is why is someone accused of killing their roommate with a hammer either not in jail or at least under house arrest with an ankle monitor? Hello liberal DA's and Judges.