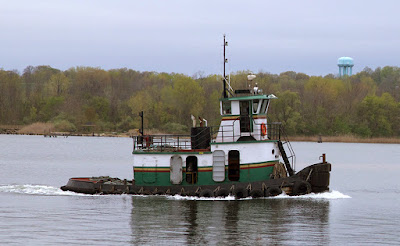 It's funny, isn't it, how the books we read as young children stay with us.  The one book I remember is called "Little Toot."  I believe it began "Little Toot was just a tug, a happy harbor tug..."  Then he decided to go exploring and headed down a river.  Anyhow, I hadn't really thought of that book for years, until I saw this small tugboat in Hempstead Harbor, coming back from somewhere, and the story in the book came back to me in an instant.  There are a lot of larger tugboats in the harbor all the time, moving big barges carrying fuel around, but I have never seen such a small tug before.

Joan: Do you HAVE the book? I want to read it again as well.

I remember having the book with a little record, too. Loved that story! Wonder what happened to it...bsk

Betsey, I have your record album and story that is written on two pages of cover. I moved a bucket of records from Seaside, along with 45's, some of which I gave Ken. Went searching after seeing your comment. :-)
Joan

I would love to hear it again. I probably drove mom crazy playing it over & over!! bsk