"There's a Little Black Spot on the Sun Today" 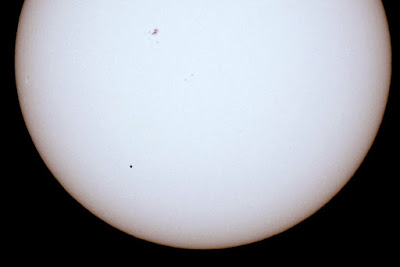 Today was the day of the Transit of Mercury.  I went to the beach in Bayville and set up my telescope.  Just like the Transit of Venus in 2004, the sky was cloudy for almost an hour after Mercury started to cross the Sun.  Mercury is the lower black dot, by the way.  The upper gray area on the sun is a sunspot.  I did get some photographs through breaks in the cloud, just at the beginning.  The transit lasted over seven hours. These transits don't happen very often - only about 13 or 14 per century.  The last three transits occurred in 1999, 2003, and 2006.  The next will occur on November 11, 2019, and then the one after that will be on November 13, 2032.  It is an amazing thing to see a planet cross the face of the sun - it is, in fact, mind boggling.  It is surprising how small Mercury is, compared to the Sun. The lyrics to Sting's song, in the title of the blog, came to mind almost immediately when I saw Mercury on the face of the Sun. Please click on the image to see it much larger.

Mind boggling is right. Thank you for sharing your wealth of knowledge of our universe and this photo.
Joan