I Broke My Ladder Today 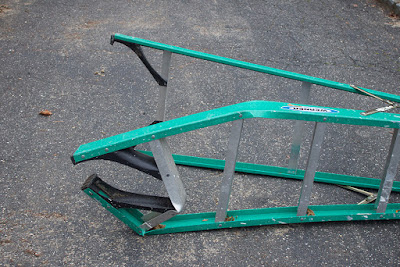 I broke my stepladder today.  "What?"  Yeah, I did.  "Man how did you break the ladder?"  I fell on it.  "What, you FELL on it?  How did you do that?"  I set the ladder in the garden near the bay window and was going to install a couple of new storm windows for the sides of the bay window.  "Yeah, so then what happened?"  Well, the soil in the garden was softer than I thought, and I was on maybe the third step, and the ladder started tipping to the right.  Before I could do anything, my feet were way off to the right, and I was falling straight down!  It happened so quickly!  Then I fell onto the leg of the ladder - the part that is bent.  I landed on the ladder with my chest!  Yikes!  It knocked the wind out of me!  It took a minute to regain my breath, and then I felt the pain in my ribs, on the left hand side.  Ouch! 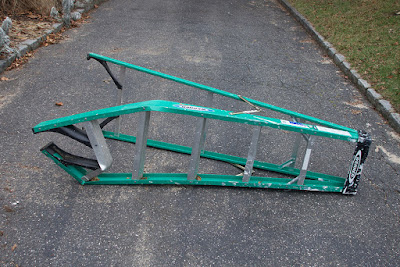 Kathy said we should go to the Emergency Room just in case, because we are leaving for California in two days.  So we went there, and were there 2 1/2 hours, but there were a lot of people more in need of help than I.  They did a series of X-Rays, and the doctor came in and said it didn't appear that any ribs were broken, but she wanted the radiologist to check them and he wasn't around, so we came home.  I am taking Tylenol for the pain.  So here is the GOOD news - I had fallen on this ladder which was fiberglass and aluminum, and my weight bent the side of the ladder.  So the bending of the ladder essentially softened my fall  - if I had fallen on something solid like concrete blocks, I bet I would be nursing some broken ribs!  Whew!  Lucky me!

Did you buy the extended warranty on the ladder?

First, I have to say that I am very glad you are OK and that this mishap will not affect your trip to California. When you go shopping for a replacement ladder, be sure to check out the weight limits and go for a heavier duty model. Most likely all the donuts and pastries your have been consuming in recent years will require you to step up a size!

I am glad you were not injured more than you were with broken bones or fractured ribs. Im guessing you didn't finish the storm windows. Photodiode and Ken Schwarz gave me a morning chuckle and smile.
Joan

You guys make me laugh out loud! Thanks!

I'm happy to read that you'd didn't break any ribs. Would not have thought about the soil/ground being soft and could cause the ladder to fall over. Guess you are "lucky". Take care of yourself while you are traveling. betsey

That is scary. I'm glad you are okay! Trace