"Museum of the Moon" 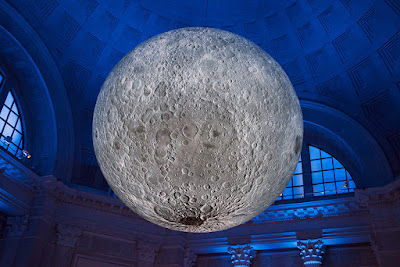 Today, I took a bus trip to Philadelphia with a bunch of other amateur astronomers from Long Island and New York City.  We went to the Franklin Institute which is a great science museum.  We started by spending time in the rotunda, looking at an artwork called "Museum of the Moon" created by Luke Jerran.  It is a 23 food diameter inflatable ball printed on the surface with NASA photographs of the moon, showing it in great detail.  It is illuminated from within, while the walls and ceiling of the rotunda are bathed in blue light.  It is an absolutely stunning thing to see in person. 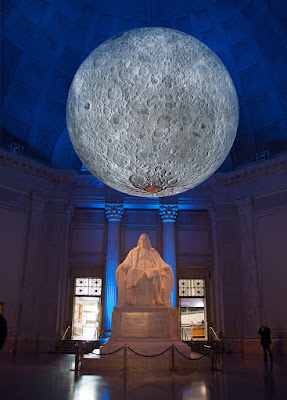 I thought that showing the moon globe alone would be more impressive, but maybe this photo is more interesting, because it includes the statue of Benjamin Franklin which has always been in the rotunda at Franklin Institute.

Thanks so much! I had seen some photos of it, but they did not prepare me for how beautiful it was to see in person!

How ingenious to print the ball with NASA photographs! Cannot believe it's 23 feet - yikes!! Glad you posted the 2nd photo to show scale. Great idea for your group to travel to Philadelphia for the exhibit. betsey