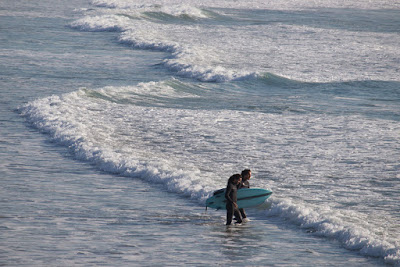 I was standing up on the Venice pier for probably an hour, sometimes looking west, and sometimes looking to the east.  Much of the time I was just watching the waves, streaming in from offshore.  I found it mesmerizing to watch the shapes of the leading edges of the waves as they broke closer to shore.  I would look at the design of the curves of the waves in the background.  That's how I happened to take this photograph - I watched the surfers head in to the water, but I was really concentrating on the shapes of the waves in the background.  This photo is about the waves, not the surfers.

Love the water and waves! betsey

Beautiful photo of the waves! Trace