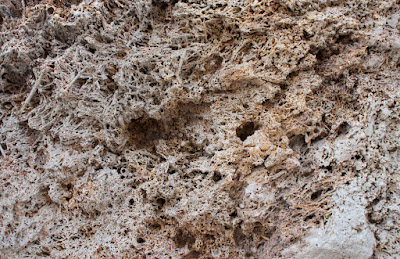 I discovered a really interesting thing when visiting the Getty this time.  On an exterior wall off the beaten path, I discovered this incredible "thing" sticking out of the wall.  It looked like some kind of marine growth with things that look like little worms all over it.  It was unbelievable.  This is a close in view. This special block sticks out about 6" from the rest of the wall. 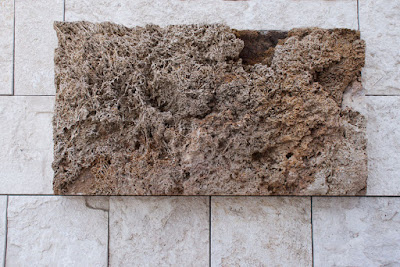 I stepped back to show this view, which shows how the special block is installed in the wall.  So what is this?  It's Travertine.  What kind of stone is travertine? Why are there fossils in it?  Travertine is a product of the earth's water and carbon cycles. As carbon dioxide-rich rainwater percolates through soil and stone, it slowly dissolves tremendous quantities of limestone along underground fissures. Reemerging at the surface as a spring (now saturated with dissolved limestone), this water releases carbon dioxide gas into the atmosphere—much like carbonated mineral water. Because of this "Perrier effect," the limestone can no longer remain in solution. It recrystallizes, typically as the water cascades over organic films made of bacteria, algae, and mosses.  Minerals crystallizing on the ever-present bacteria in travertine deposits—like granular snow blanketing a miniature landscape—preserve organic growth forms, called "shrubs," and produce much of the rugged relief evident across the stone's surface.  I know, this is way more than you wanted to know, but at least you have a clue how this amazing stone is formed.

My brain in now numb!

My brain is also numb. If the museum dug this up and mounted it in the wall, how does it survive if it is not in its natural habitat. How long has it been there?
Joan

While the age of the stone used for the Getty Center is unknown, it probably dates from about 8,000 to 80,000 years ago. So after it is formed in this fashion, it is stone, and so some water on it is not going to make it dissolve and go away. The Getty Center opened to the public in December of 1997. So far, so good.