A Work of Art or a Mistake? 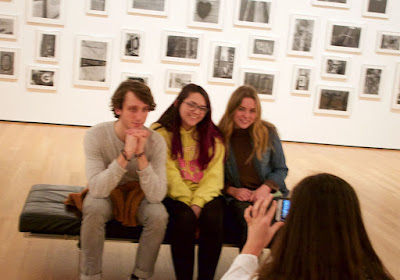 I am back in business!  The glitch was apparently with Blogspot, and I am thankful that everything is working again!  I saw this scene in MoMA while in one of the galleries, and as I quickly lifted my camera to shoot,  I saw that the photographer was nearly finished so I quickly mashed the shutter release to try and get the shot!  Well, the shot is blurry and tilted.  Both of those qualities can be used in photography to suggest energy or the transitory nature of life.  There is something else I just read about but didn't know its name: "The Dutch Angle."  The reason why it is called the “Dutch” angle is from a mispronunciation — it is actually the “Deutsch” angle. It is not related to the Dutch people or language.  It means tilting the camera for dramatic effect.  Actually I do like the sense of excitement that comes from the blur in the image.  So having used blur and tilt, perhaps I have a work of art.  Or not...   :-)