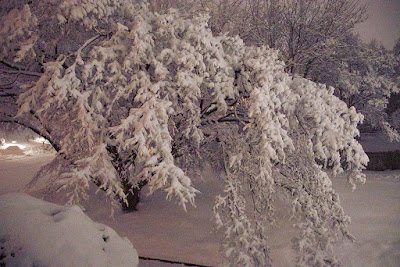 It started snowing early in the evening yesterday, and by the time I was ready for bed, I took a look out the window and saw the Japanese maple loaded down with snow.  It was very dark outside and I was too lazy to go get my tripod.  So I set the ISO (film speed) to 25,600, which is a crazy number.  Normal film speed is 400.  Anyhow, I leaned up against the side of the porch and made a few exposures.  It wasn't enough.  So I turned on the outside back spotlights that shine on the garage, and the light reflecting off of the snow added some illumination to the maple tree, and this is the result.

I am totally exhausted thinking about the effort you put into taking this photo at 1:30 AM and now you have to break out your snow blower to clean the driveway!