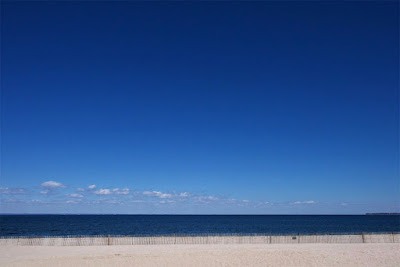 I drove out to Sunken Meadow State Park the other day, to get a Stargazing Permit for several state parks on Long Island.  The permit allows us to be in some of the parks after the parks close at sunset, in order for us to set up telescopes and view the night sky.  It was an almost perfectly clear day, and as I approached the park,  I was on higher ground and caught a glimpse of Long Island Sound through the trees as I descended.  The sound was as brilliant blue as was the sky!  What a day.  After getting my permit, I walked out to the boardwalk which is nearly a mile long, and photographed the beach and water and the sky.  Bluer than blue indeed!

Wow thanks for stopping to take this beautiful photo. At first glance I thought it was a Mark Rothko painting !

Now that it is officially Spring, I am changing my desktop photo to this one. Gorgeous! It's so blue. I love it! betsey

Great photo of the beach and water! Trace

We don't really need anymore people moving to Long Island, and I'm afraid that your sensational photo of the beach, water and sky may lure them here! Thanks a LOT!!!!! Lol....Babs