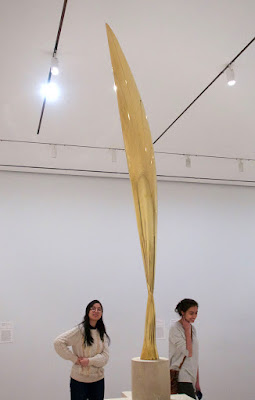 This is the sculpture "Bird in Space" by Constantin Brancusi.  It is amazing to see this sculpture in person, after knowing about it for maybe 50 years!  I looked up what someone had to say about this: "In the Bird in Space, Brancuși concentrated not on the physical attributes of the bird, but instead on its movement. The bird's wings and feathers are eliminated, the swell of the body is elongated, and the head and beak are reduced to a slanted oval plane."    So, get this story: In 1926 the artist shipped the bronze “Bird in Space” to New York for an exhibition.  According to U.S. Customs officials, the sculpture failed to satisfy this country’s qualifications for a work of art.  First of all, the sculpture did not literally resemble a bird, and, second, it appeared to be an industrially produced object!  In 1928 the case was decided in the artist’s favor, largely because of how the work was made and the fact that - unlike mass-produced goods - it was indeed singular.  Crazy, huh?

Crazy it is. I am amazed at how modern this piece is from 1926. Thanks for your photo and great story.
Joan

Ken, What is the sculpture made of? It is very modern and unique. betsey

It is made of polished bronze. Just gorgeous, isn't it?