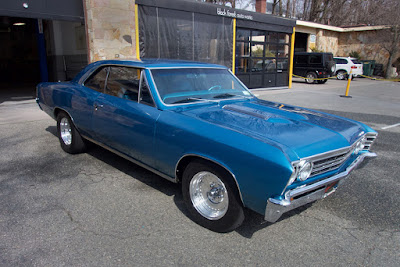 Kathy had a guy bang in to the back of her car when she was stopped in traffic.  The crash didn't bend any metal, but the bumper needs to be replaced, so we went over to this auto body shop to get an estimate.  While we were there we saw this car, and its owner.  I am not a motor-head but I was stunned by how beautiful this car was.  So I started asking the owner about the car.  Get this - it is a 1967 Chevrolet Malibu.  The owner bought it used as a teenager in 1968 for $1000!  And he has owned the car since then, and done a lot of work on it.  It is in mint condition! 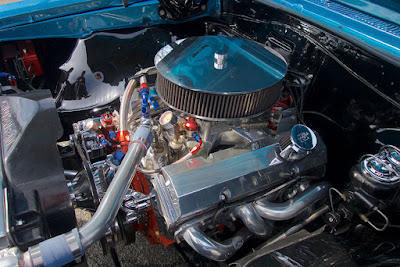 Like putting in this engine!  This is a serious chunk of hardware.  The engine includes a nitrous oxide injection system.  The first time he used it, it delivered so much torque, it broke the differential!  So he replaced it with a stronger unit. 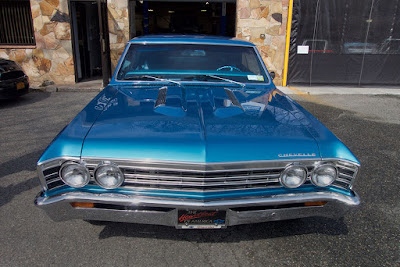 So while we were talking, I suddenly remembered there was something about a '67 Chevrolet Malibu - that was the first new car I ever owned!  I didn't look like this - it was white with a black vinyl roof.  Wow, this all takes me back!  Maybe I will become a motor-head!

Beautiful! I love that owner has had this car since 1968 and has kept it in top shape.
Joan

Wow! When Ronni and I got married in Albuquerque in September 1967 we needed a car. So we decided to start our married life with a brand new Chevy Malibu SS 396 Super Sport. The price was approximately $3,400 and we owned the car for about ten years. It was a fun car to drive! The body color was called "Fawn" with a black vinyl top. While living in Shelby, NC, I sold the car to some kid who I later heard had wrapped the car around a tree - he was not hurt but the car was totaled! The '67 Malibu was a very nice looking piece of machinery.