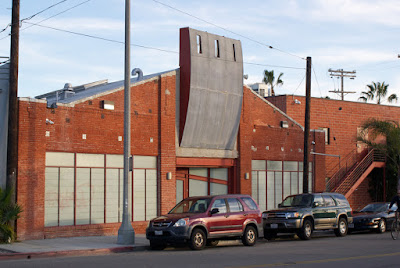 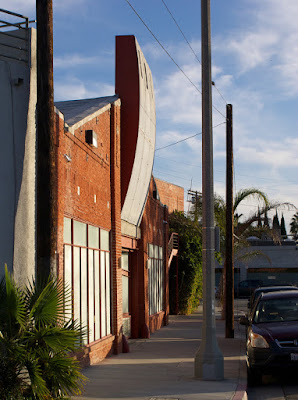 About six months ago I watched a documentary on PBS about the designers Charles and Ray Eames.  They were husband and wife American designers who made significant historical contributions to the development of modern architecture and furniture. Among their most well-known designs is the Eames Lounge Chair. They also worked in the fields of industrial and graphic design, exhibition design, fine art and film. I was stunned to learn that their studio, which was in operation for more than forty years, is on Washington Boulevard, in Venice, California!  So I went hunting for it this trip, and found it.  Unfortunately, when I visited it several times, there were cars parked in front.  I liked the light on the building at this time of day, so I had to live with the cars in the photograph.  The building was a garage before it was a studio, and it was recently for sale, and it was purchased by someone.

Today's post brought back memories of a moment in time during our early married life. We were living in our third apartment furnished with various second-hand and hand-me-down pieces of furniture. A neighbor, who was a young architect and his wife, told us they were moving one day and wanted to sell their (classic) Eames Lounge Chair. I do not remember the price they wanted but I do remember that the price was very fair because, due to his profession, he bought the chair at a very good discount. But back in those days (circa 1970) a dollar was a dollar and we didn't have a lot of extra dollars to spend so we decided not to buy the Eames chair. Every once in a while I think about that classic chair but have no regrets for letting the opportunity pass.

As a footnote, one of the "used" pieces of furniture we did buy for that apartment turned out to be a classic Gustav Stickley sideboard, which is worth much more now than what we paid back then.

What a great story! Thanks for telling us about it! I knew a little bit about Eames from a few sources, and was stunned to watch the PBS show, and realize that their studio was a place I had driven by a number of times!