Country Bumpkins in the Big City 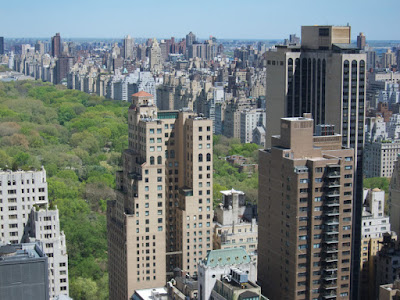 In the office building we were in yesterday, there was this view out the window, of Central Park and all the buildings surrounding it. Wow, there sure are a lot of buildings in Manhattan! Yup! Golly Gee. Lookit all them buildings... I didn't want to seem like a country bumpkin, so I waited until we were alone by the window, and then I quickly got out my toy camera and grabbed a few shots of the scene before anyone could discover me. It really is a stunning view.
Posted by Ken Spencer at 9:43 PM

How could anyone grow tired of looking at the New York City skyline, from any place angle or direction, including the Long Island Expressway, on a Circle Line cruise, the rooftop of an apartment building, the observation deck of the Empire State Building. It's a beautiful city; crowded and noisy, yes, but like the work of art that it is, it has so much depth and texture, and is so fulfilling to look at and to be a part of it, whether we're lucky enough to live there or just visit once in awhile. I've never heard anyone say they hated the city. They may be fed up with traffic and the lack of parking spaces; the high prices and occasional smog, but its plusses far outweigh anything negative. It's great that you're in love with what you see in the city. And we're all the beneficiaries of your discerning eye. Keep shooting city scenes, please. I, for one, will never tire of seeing them.

Wow, thank you, thank you! I never have a problem finding photographs in the city! Somy things to see and photograph that it makes my head spin. Thanks for your nice comments - I really appreciate everything you wrote.