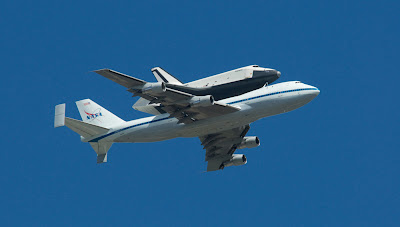 It was a great day in New York today! The Space Shuttle "Enterprise" flew on the back of a Boeing 747 from Dulles airport in Washington, to John F. Kenedy airport in New York. The really cool thing was that they decided to fly a tour of metropolitan New York to show the shuttle to everyone, before landing at JFK. It flew in from the south, then past the Statue of Liberty and up the Hudson River to the Tappan Zee Bridge, then back down the Hudson River and then over to Newark Airport, then up to LaGuardia airport, then out to Long Island, where it overflew the New York TRACON, which is where the air traffic controllers work. I decided to try and photograph the flyby from the Cradle of Aviation Museum near the TRACON, and I was in luck! I brought a 300mm lens and a 200mm lens, and the 300mm was the one I used on my Nikon to shoot this photograph. It was beyond cool to witness this in person! I have posted a larger than normal file - please click on this to see it with more detail.
Posted by Ken Spencer at 8:24 PM

Very Cool. I ventured to Battery Park for this - where it was frigid. Tried to grab it with the Statue of Liberty but it was quite high at that part of the flight. It was cool to see the last shuttle that would ever be aloft. Nice to see you break out the real camera from time to time.

What an impressive shot! Brought a tear to my eye as I watched the 'flyover' on national news of the Discovery and now the Enterprise...
Glad you were able to capture this historic moment.

Thank you all for your nice comments. Much appreciated.