A Fine Day for Motorcycles 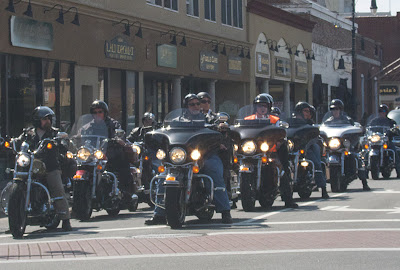 On the way to church today we were passed by about a dozen motorcycles riding in a group as we entered Westbury. Then a hundred feel later, another dozen, and then another dozen, and finally, since I was stopped at a light I got out my toy camera and grabbed one frame of the last dozen. I have no idea where they were going, but they were organized - there were guys in orange vests at both the beginning and end of each group. End of my story. Sometimes I am not a great reporter... :-)
Posted by Ken Spencer at 8:32 PM