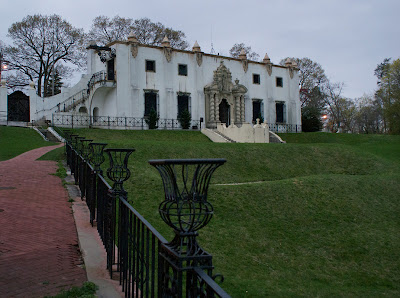 I arrived at my astronomy club meeting tonight earlier than normal. So I started looking around a bit, now that it is still daylight out when the meetings begin. This is one of the buildings at the Vanderbilt Museum and Planetarium that I have not been inside. I think it is a museum which has on display some of the amazing objects that William K. Vanderbilt II, an avid collector of natural history and marine specimens, as well as other anthropological objects, acquired on his trips around the world. This photograph is actually more about the wrought-iron fence that is in the foreground - that's what caught my eye, and then I just included the building because it was there. It is a pretty interesting building, though.
Posted by Ken Spencer at 8:49 PM

Wish you'd gotten a closeup of the ornate framing on the front door. Maybe it doesn't look like much up close, but it seems to have great picture potential from where you were standing.

Maybe I will go back and photograph the front door framing all by itself, when I get a chance. Good Suggestion.