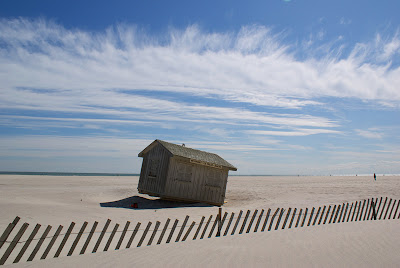 First, I LOVE this shot - there are so many things going on. Second, this is not a house, of course, but the title would be a bit awkward if I called this post "The Tilted Concession Stand," you know? Apparently they drag these buildings up near the boardwalk for the winter, but strong winds form drifts of sand around parts of the building, and undermine other parts, thus causing this structure to tilt. I wandered around it several different times while at the beach, and kept coming back to it, and photographed it from every different direction. Like so many times in my past, the best shot, this one, was the last shot I took. Happens every time. I love all the stuff going on in this photo, from the building itself to the drift fence, the sand dune, the feathery cirrus cloud above, and last but not least, the small singular figure off to the right.
Posted by Ken Spencer at 9:04 PM

Love the beach pictures and the tilted house adds charm to it. Also liked the picture of Uncle Vincent yesterday. Reminded me of the holidays/family events of yesteryear and the great pictures you and he both took!! We always got a laugh because posing for family pictures was as significant as the event itself. The pictures now remind us of great times! Trace

Sam thinks of the tilted salt shaker, like the squarish ones used in diners. You can tilt it so it is supported by some salt crystals on the smooth table, then blow away the excess salt.