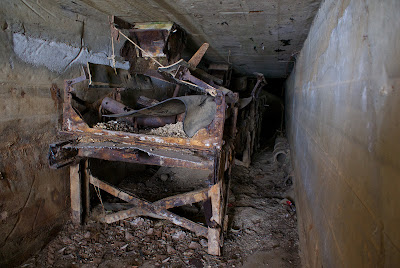 I visited the sandminer's monument in Port Washington yesterday. The Port Washington sandpits were the source of 90 percent of the sand used to make the concrete that built New York City! For years I watched the machinery when it was in operation, and then when it all shut down, I spent a couple of days wandering around the old buildings and the ruins of the sand washing tower, but because it was so decrepit, I didn't dare go inside and climb around in it. How unlike me. Anyhow, now they have a monument to the men who worked here, and they included this original piece of conveyor belt left in its tunnel. I had to climb over a fence to get to this, but I wanted to photograph the real thing.
Posted by Ken Spencer at 10:22 PM