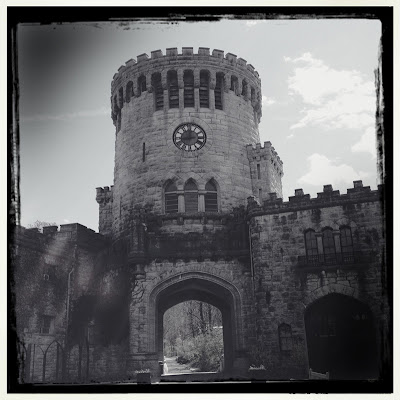 Another field trip today - this time to the Sands Point Preserve. There are two interesting buildings there - "Hempstead House" which was a home built by Howard Gould, and later owned by Daniel Guggenheim. His son Harry, and wife Alicia Patterson began Newsday back in 1940. The other structure on the property is called Gould Castle, and it is this building. Pretty classy, huh? Get this - it is the stable and carriage house! Some carriage house, huh? The inside is not open, but there is plenty to photograph on the outside. I used Hipstamatic on the iPhone, to give it an old-fashioned feeling.
Posted by Ken Spencer at 9:50 PM

Crazy Sam visualizes an Easter lily growing out of the top, as if from a giant vase... .

And the wealthy castle dwellers said, "Let them eat cake..."

There was the unmistakable sense of money here - to think that this structure was for the horses and carriages! Yikes! Howard Gould's father was Jay Gould, one of the robber barons of the railroads in the US. Howard was mainly known, apparently, as being a yachtsman. Nice life if you can get it!